Digging into a Babel-Related Error in Jest

Not so long ago, I decided to add some tests to a small program I wrote. I chose to use jest, a nice testing platform by facebook that I've enjoyed using in the past. This time, however, I had some trouble: I ran into a babel-related error with my very first test. I'd like to be a world-class debugger someday, so I figured I'd dig in and really try to understand the error.

This post describes how to set up a little app that reproduces the error, and next, how to debug the error using tools from the modern JavaScript toolbox.

(If you'd like, you can skip this section and reproduce the error by cloning this repository.)

In order to get jest to show us this babel-related error, we'll do the following things:

Let's start out by creating that sum function.

(If you saw the bug in this code, then good for you! If not, then that's fine—I didn't see it either, so I had to learn how to debug it.)

Two more steps until we can run our tests. First, we'll create a package.json file containing our test script, which will run jest. Run npm init, and answer the test command prompt with jest (you can use the defaults for everything else).

Finally, we install jest with npm i jest.

Hurray! We now run the test script with npm t (a shortcut for npm test, or npm run test), and we see...

Jest's documentation on configuring babel is a bit complicated with a number of side notes. Long story short, jest comes with a library called babel-jest, so all we have to do to make jest understand our import syntax is the following:

With that done, babel should be good to go.

Running our tests again (npm t), we get a more cryptic error this time:

Hey, at least our test suite is running now!

If you don't have a lot of experience with babel, then this error will seem a bit strange. Where in the world did _index2.default come from? Who cares if it's not a function—I didn't write anything like that in my code!

Hold on a moment. Let's try to remember what babel is doing. Babel is a transpiler, so it's transforming your code into something that jest can understand. Does that mean it might be transforming variable names as well, and outputting things like _index2.default?

In order to answer that question, let's consult a handy section of the jest docs, aptly named, "Tests are Failing and You Don't Know Why". The docs recommend we use a debugger, which seems like a great idea for getting more info!

Let's add a debugger line into our code, to tell our debugging tool to stop at that line:

Next, let's run our tests as recommended by the docs:

This gives us the following output:

Looking at the above link, we can see a bunch of different options for debugging our code. Let's use Chrome, since most of us will have it installed already. 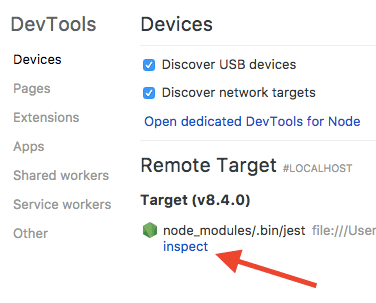 After a little wait, our spec.js file will open and you'll see our sum test containing the debugger line.

_index2.default is still no where in sight, but that's because we're looking at the "Source Map" of our code—that is, the original code that we wrote. Chrome shows this to us in a couple places: 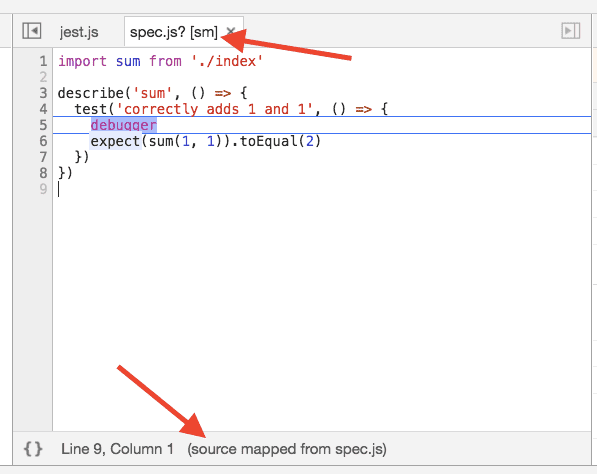 Generally, it's much nicer to look at the Source Map of some code than its transpiled version, which is why Chrome shows it to us. However, we're interested to see whether our transpiled code contains _index2.default, so we need to go beyond the source map.

First, let's look in the Scope section of the debugging window. Scope contains all the variables that are accessible where we paused our code with debugger, and notably it shows us variables from our transpiled code, which is what we want to see. Taking a look around, we open up the Closure object, and... there's _index2! Open that up, and we see a sum property, as well as an __esModule property, but no default property. 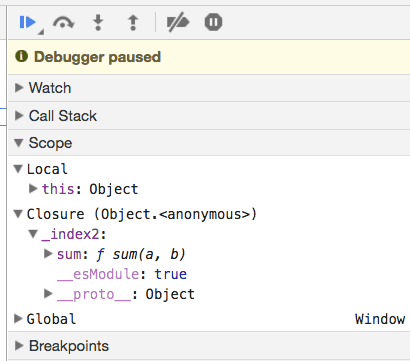 But where is _index2 coming from? And where is _index2.default being called? Clearly we need to see the actual transpiled code, not just its representation in the debugger. We can select the transpiled files in the Sources file tree, as seen here: 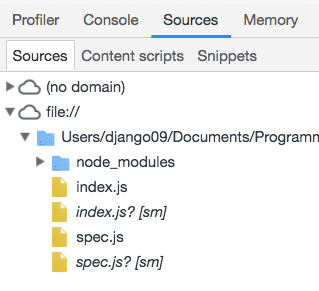 And we can "pretty-print" the transpiled code to improve its readability. 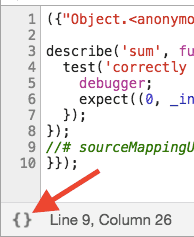 Now we finally see our transpiled code in all its glory! We'll want to look at both index.js and spec.js to get a complete picture of what's going wrong. Here's both of the transpiled files:

Without getting too much into the details of babel's output, we can get a feeling for how this code works:

Seems like we're getting somewhere! If index.js sets exports.sum to our sum function, then we would expect spec.js to use it like _index2.sum. Instead, it tries to use _index2.default, which explains our original error...

_index2.default isn't a function because it's undefined, as we saw when we looked in the _index2 object in the Debugger Scope. But how can we fix our original code? We seem to be accessing the sum function in the wrong way, so let's check out how we're importing and exporting the function:

Ah-ha! We're exporting sum as a named variable and importing it as the default. To fix this error, we can either change the named export into a default export or change the default import into a named import. Let's do the former:

And now we can feel extra happy, because we debugged the error, we understand where it's coming from, and we'll be unfazed if we see it again.

The takeaway from this round of debugging is: do your best to deeply understand the errors you encounter. If you think you understand an error, but you're not sure, it can help to write down any questions that are floating around your head. Then you can methodically tackle each question and improve your debugging skills. This is a strategy that I'm learning myself, and I hope it proves useful to you.